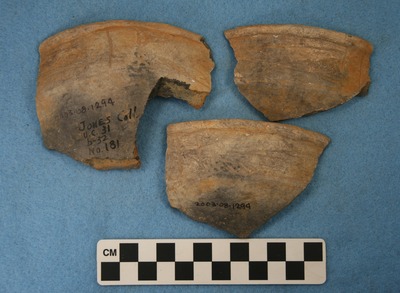 NON-PLASTICS AND PASTE: grog and bone (<1% of temper inclusions)

EXTERIOR SURFACE COLOR: dark yellowish-brown; fire clouding on the rim, body, and base

DECORATION (INCLUDING MOTIF AND ELEMENTS WHEN APPARENT): The rim is decorated with a bisected diamond engraved motif that is repeated four times around the vessel. Each motif is divided from the other by two sets of three vertical engraved lines. The motif itself consists of three engraved triangles, each larger than the other, and the largest is truncated at its apex. The smallest of the triangles is filled with cross-hatched lines, and there are opposed cross-hatched triangular zones alongside the upper part of the large truncated triangle.