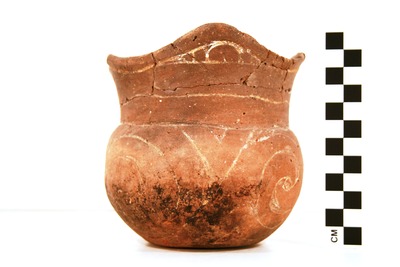 EXTERIOR SURFACE COLOR: pale brown (10YR 6/3); fire clouding on the rim and base; organic residue on the body

DECORATION: The rim has three widely-spaced horizontal engraved lines. Each rim peak has a negative oval, smaller negative ovals, and triangular excised areas; the negative oval has a small central excised spur. The vessel body has curvilinear scroll arms that hook around each other and meet at a central excised circle; the hooked arm scrolls are repeated four times around the body. There are widened excised and hatched areas on the scroll arms opposite the central excised circles. The upper and lower scroll arms originate from the apex of upper and lower engraved triangles; there are excised areas where the apex of the triangles meet the arms of the scroll. A white kaolin clay pigment has also been rubbed in the engraved lines.