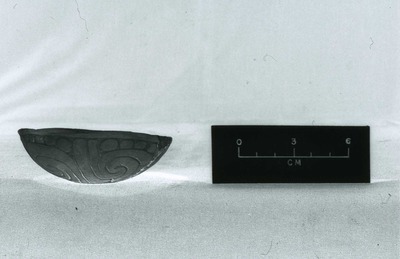 INTERIOR SURFACE COLOR: reddish-brown; fire clouds on the rim, body, and base

EXTERIOR SURFACE COLOR: reddish-brown; fire clouds on the rim, body, and base

DIAMETER AT BOTTOM OF RIM OR NECK (IN CM): N/A

BASE DIAMETER (IN CM) AND SHAPE OF BASE: 2.5 cm, circular and rounded

DECORATION (INCLUDING MOTIF AND ELEMENTS WHEN APPARENT): The bowl is divided into four panels by sets of two vertical engraved lines. Within the panels are four vertical engraved scrolls with rounded ends and hooked arm elements. Three sets of vertical scrolls have attached vertical excised brackets and an upper scroll fill zone with negative ovals formed by excised brackets. The fourth set has an attached excised bracket, one scroll arm that begins at an excised triangle, and the other scroll arm begins at a large pendant triangle with excised corners and a negative oval element. The upper scroll fill zone has negative ovals and circles and a large excised triangle element.