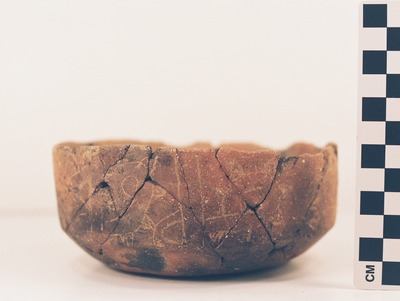 VESSEL FORM: Carinated bowl with a direct rim and a rounded lip

EXTERIOR SURFACE TREATMENT: smoothed on the rim and body; fire clouds on lower body and base

DECORATION: The rim is divided into six panels by sets of vertical engraved lines. Each panel has unique engraved motifs that feature—in varying combinations—circles or ovals, semi-circles, hooked arm scrolls, pendant triangles, and hatched ovals. All these elements are commonly featured on upper Neches River Poynor Engraved vessels, but not in the combinations represented on Feature 91, Vessel 2.