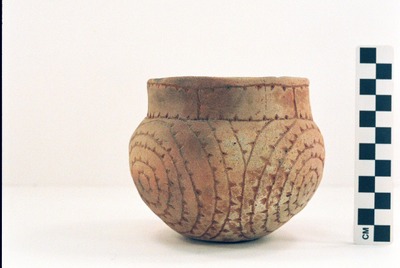 NON-PLASTICS AND PASTE: grog and hematite

INTERIOR SURFACE TREATMENT: burnished on the rim and smoothed on the body

EXTERIOR SURFACE TREATMENT: smoothed on the rim and body

BASE DIAMETER (IN CM) AND SHAPE OF BASE: 5.5; circular and flat

DECORATION (INCLUDING MOTIF AND ELEMENTS WHEN APPARENT): The rim panel is defined by single upper and lower horizontal engraved lines with either downward- or upward-pointing excised tick marks. The panel is divided by six sets of vertical engraved lines. The vessel body has three sets of concentric circles and semi-circles, with each line having an outward-facing tick mark. The sets of concentric circles and semi-circles are divided at their upper end by three large open pendant triangles as well as a single curvilinear line that extends towards the vessel base from its beginning at the apex of the pendant triangle elements. There are inward-pointing tick marks on two sides of the triangles, and the curvilinear line has outward-pointing excised tick marks.

PIGMENT USE AND LOCATION ON VESSEL: white pigment in the engraved lines