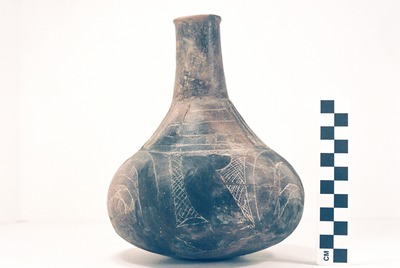 EXTERIOR SURFACE TREATMENT: burnished on the neck and body

DECORATION: The top of the bottle body has six horizontal engraved lines that are bisected by three sets of three vertical appliqued ridges (cf. Suhm and Jelks 1962:Plate 23o-p). A white kaolin clay pigment had been rubbed in the engraved lines. A similar Friendship Engraved bottle has been documented from a burial at the Wm. Handy Place.