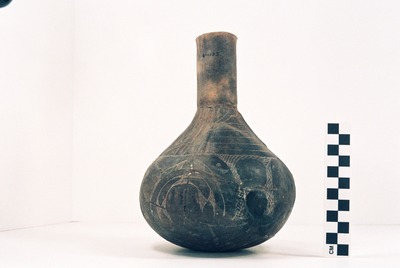 CONTEXT INFORMATION: This vessel, along with 18 other vessels, came from a grave exposed in June 1934 during plowing by Dan Jenkins from his potato patch. The other vessels found include V-1123 to V-1136 as well as sherds from four vessels (V-159 to V-162). According to Mr. Jenkins, some of the vessels were found around the head of the individual, with the remainder at the feet.

EXTERIOR SURFACE TREATMENT: burnished on the neck and body

DECORATION: The top of the bottle body has six horizontal engraved lines that are bisected by three sets of three vertical appliqued ridges; one set is not as long as the others. A similar Friendship Engraved bottle has been documented from a burial at the Wm. Handy Place.