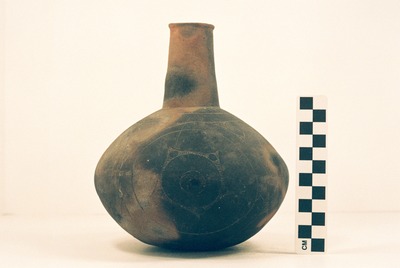 CONTEXT INFORMATION: From a grave exposed from a Red River flood in 1938. Associated with V-1961 and V-1962 and two clay ear plugs

NON-PLASTICS: grog, with a sandy paste

EXTERIOR SURFACE TREATMENT: smoothed on the neck and body

DECORATION: The top of the body is encircled with a single horizontal engraved line. the remainder of the body has four panels defined by four sets of large engraved pendant triangles with negative ovals, three hatched corners, and a fourth hatched triangle next to a thin engraved spur that extends into the negative ovals. Within each of these panels is a large circle that has a five-sided element at its center. The five-sided element is hatched along its margins, forming five negative ovals, and at the center is a smaller circle or disc with a small dimple at its center, and with three lines radiating from it.

This work is licensed under a Creative Commons Attribution 4.0 International License.