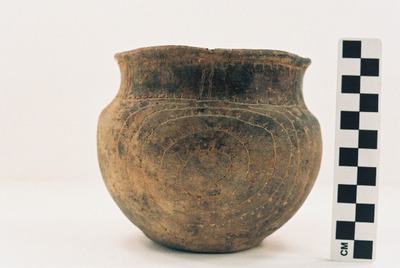 CORE COLOR: A (fired and cooled in an oxidizing environment)

INTERIOR SURFACE TREATMENT: burnished on the rim and smoothed on the body

EXTERIOR SURFACE TREATMENT: burnished on the rim and smoothed on the body

BASE DIAMETER (IN CM) AND SHAPE OF BASE: 6.8; circular and flat

DECORATION (INCLUDING MOTIF AND ELEMENTS WHEN APPARENT): The rim panel is defined by single upper and lower horizontal engraved lines with tick marks. The rim is divided into six sections by six sets of two closely-spaced vertical engraved lines. The vessel body has three sets of engraved concentric spirals that have outward-pointing tick marks on each spiral line. The concentric spirals are divided at their upper ends by three large open pendant triangles, one of which has tick marks on its outer lines as well as a single inner vertical engraved line.