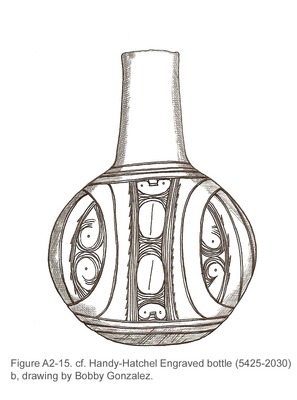 CONTEXT INFORMATION: From a grave in a cemetery excavated by Horace McLendon in the fall of 1941. Associated vessels (from several graves dug at that time) include V-2343 to V-2365.

VESSEL FORM: Bottle with a straight to slightly tapered neck

RIM AND LIP FORM: Direct rim with a rounded lip

EXTERIOR SURFACE TREATMENT: burnished on the body and neck

TYPE: the bottle has elements of both Handy Engraved and Hatchel Engraved bottles (see Suhm and Jelks 1962:Plates 32 and 34)