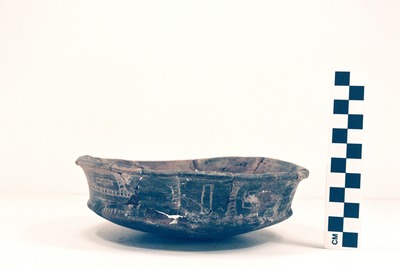 RIM AND LIP FORM: Everted rim with a rounded and exterior folded lip

CORE COLOR: G (fired in a reducing environment and cooled in a high oxygen environment)

DECORATION: The rim is divided into two panels with an horizontal interlocking engraved scroll motif; there are also small linear ticks under the lip and at the vessel carination. The scroll motif consists of a narrow horizontal and vertical engraved band filled with hatched lines, a single enclosing engraved line, and hatched brackets that end either at the rim or at the vessel carination; between the two brackets in each motif is a single small horizontally-oriented engraved rectangle.

Each motif is separated from the other by two sets of two vertical hatched brackets. Between each of the engraved brackets is a single vertically-oriented engraved rectangle.