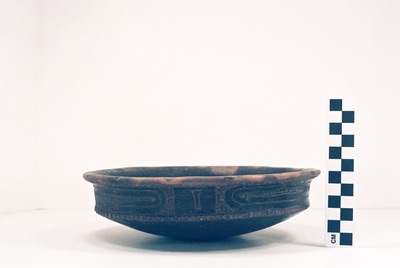 INTERIOR SURFACE TREATMENT: smoothed on the body and burnished on the rim

DECORATION: The rim panel on this vessel has two horizontal interlocking engraved-punctated scrolls; the underside of the folded lip is a row of punctations, and there is a second row of punctations at the carination point.

The interlocking scroll has a central narrow engraved band filled with punctations, opposed single hooked arm engraved lines that partially encircle the central horizontal scroll band, and two attached engraved-punctated brackets that extend from the central band to the rim or the carination. Between each of these sets of brackets is a small engraved rectangle.

The two horizontal interlocking scrolls are separated from each other by two sets of two vertical engraved and punctate-filled brackets that extend from the rim to the vessel carination. Between each of these sets is a single vertically-oriented engraved rectangle.