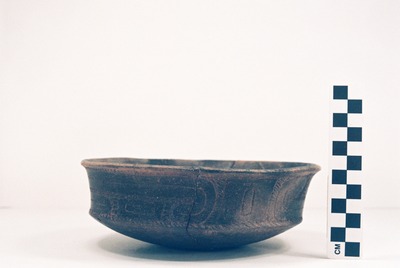 EXTERIOR SURFACE COLOR: dark gray to dark grayish-brown; fire cloud on the base

DECORATION: The rim has a horizontal interlocking engraved scroll that is repeated twice around the vessel. There are also single rows of tool punctates along the rim and at the vessel carination.

The two scrolls are divided by two sets of vertical engraved and hatched brackets that extend from the rim to the vessel carination. Between them is a single vertically-oriented engraved rectangle.