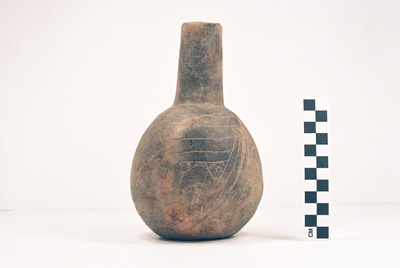 CONTEXT INFORMATION: This vessel was found in one of the mounds at the Battle site, sometime before 1932; which mound is not known, although apparently it was not the large primary Battle mound.

CORE COLOR: H (fired in a reducing environment and cooled in the open air)

EXTERIOR SURFACE TREATMENT: smoothed on the rim and body

The first engraved body panel has two parts divided by a central diagonal engraved band and an intersecting central horizontal engraved band. Each part has half circles with spurs, ovals, and hatched brackets. The second panel is divided by a scroll with spurs with an embedded, spurred, circle. On the upper left hand side of the panel is a small rectangular area (with spurs along the outside of the rectangle) filled with hooked engraved lines, cross-hatched bands, excised brackets, and hatched half circles. The lower right hand side of the panel has a corresponding small rectangular area, but it has half circles, small circles, and cross-hatched brackets.