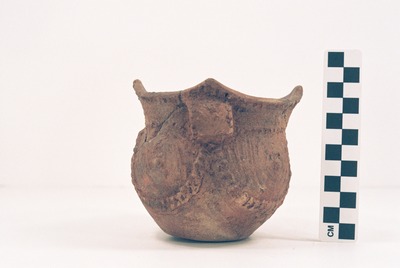 CONTEXT INFORMATION: From a grave in a cemetery excavated by Horace McLendon in the fall of 1941. Associated vessels (from several graves dug at that time) include V-2342 to V-2365.

RIM AND LIP FORM: Everted rim with a rounded and exterior folded lip

INTERIOR SURFACE TREATMENT: smoothed on the rim and body

The strap handles have two vertical rows of tool punctates along the outside edge of the handles and two sets of four diagonal opposed incised lines.