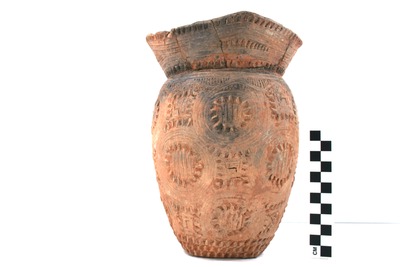 PROVENIENCE: upper burial No. 1, Md. B

RIM AND LIP FORM: everted rim and a rounded lip

DECORATION (INCLUDING MOTIF AND ELEMENTS WHEN APPARENT): The rim has two rows of tool punctations, one under the lip and rim peaks, and the other at the rim-body junction. Intervening areas on the rim has sets of four curvilinear and four horizontal incised lines.