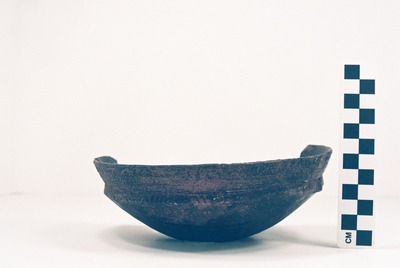 CONTEXT INFORMATION: Found in a grave, in association with V-1782, on the west side of a low platform at the north end of the Battle Mound in 1938, by Perry Marshall. This grave was encountered when Mr. Marshall was digging in the mound to obtain dirt for a chimney.

A white kaolin clay pigment had been rubbed in the engraved lines.