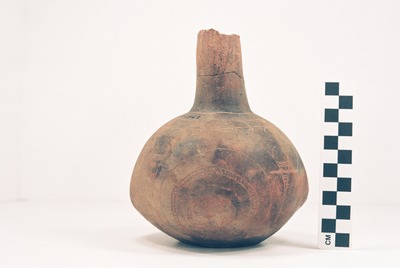 CONTEXT INFORMATION: Associated with V-1963, excavated by Dan Jenkins after plowing into some graves.

NON-PLASTICS: grog and bone (less than 5% of the paste)

RIM AND LIP FORM: Everted rim and a rounded lip

EXTERIOR SURFACE TREATMENT: burnished on the neck and the body

The concentric circle motifs on this vessel are divided by large triangular elements that extend from near the top of the bottle body to near the base. These elements include three triangular hatched corners, separate sets of straight engraved lines, and one or two short curved engraved lines that originated along the margins of the large triangular elements. Similar short curved lines are noted on other Belcher Engraved bottles, including one from the McClure site in Miller County, Arkansas (see Suhm and Jelks 1962:Plate 5m).